Opened my phone to find these lovely photos :-) Love this kid. 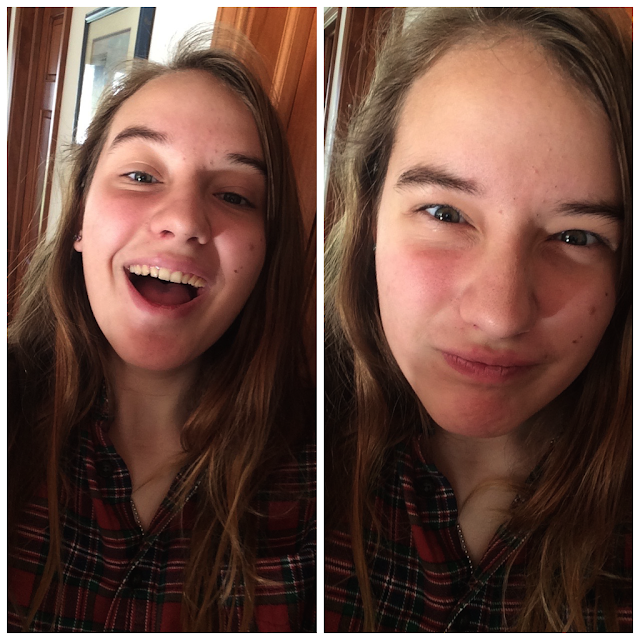 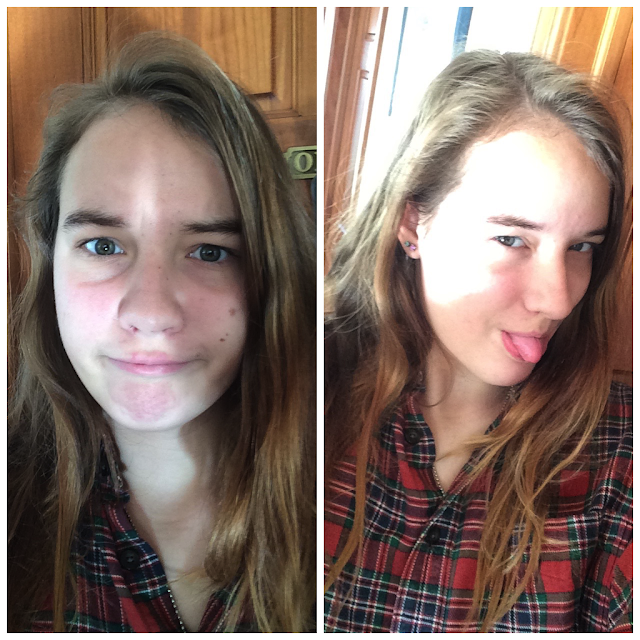 These are pre-shower selfies --I recognize that shirt, an old flannel shirt of Rob's she's been using to sleep in.
Posted by Cassi at 7:09 PM 9 comments:

Emma's Bio teacher did an experiment, and just like when she was at Spectrum School, she always wants to repeat these experiments at home. So after school on Tuesday we had to stop by a store to purchase gummy bears.

The experiment is about osmosis --sugar and water. But the end result is really big gummy bears. 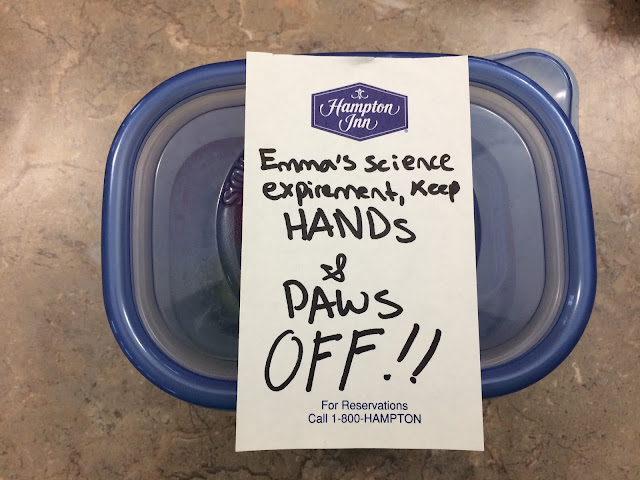 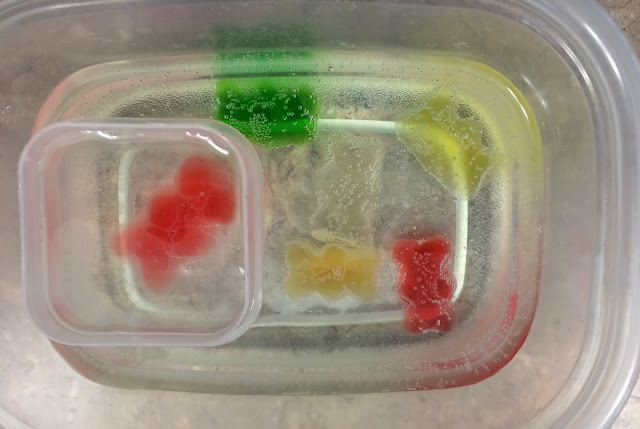 Emma tells me that they don't taste very good after the sugar has migrated out, and the water has migrated in :-) But weirdly big gummy bears appealed to her. 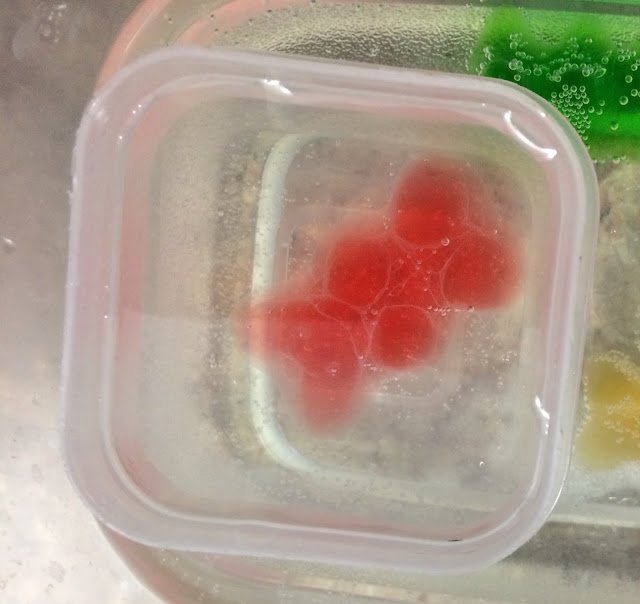 They're a little freaky, yes? 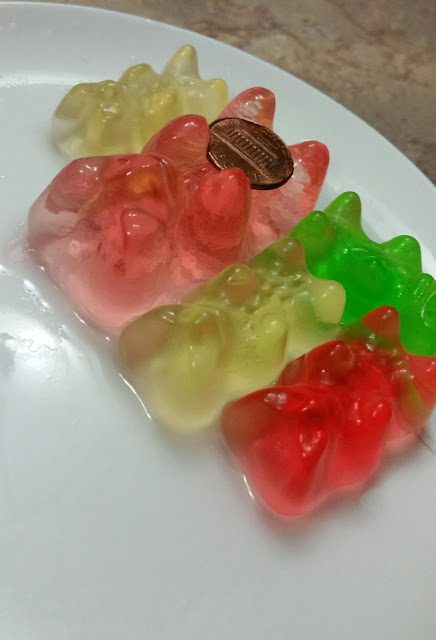 The one that got biggest was done in distilled water. The smaller ones were just tap water. So, diffusion works better in pure water. :-)

I have had a lot of trouble getting myself to work with beads this fall. I think this fall has just been mentally and emotionally difficult, and I always find it hard to be creative when I feel like things are looming over me. But at the same time, I thought if I could force it, the act of being creative might help relieve some of the stress.

I had meant to make some earrings for my sister, whose birthday was at the end of September. I've finally made a few pairs, and now I just have to get them wrapped and in the mail. Hopefully some time before Thanksgiving :-) 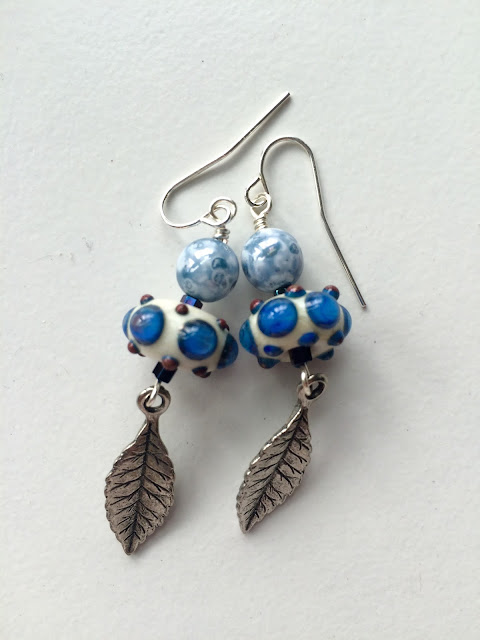 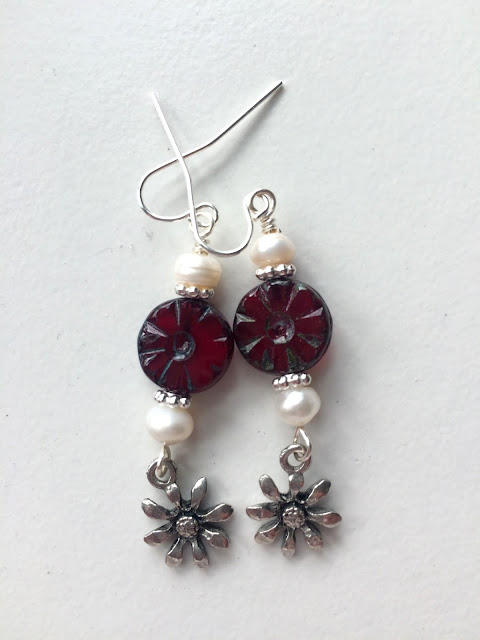 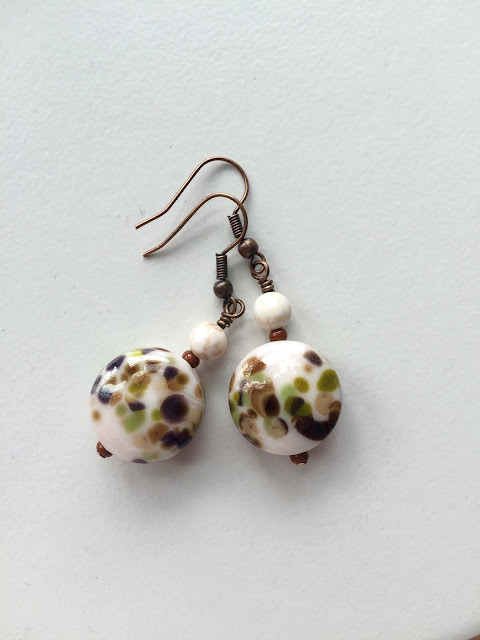 I have a pendant I've been meaning to make into a necklace for the same sister for a while. I tried this, but I'm not happy with it. The cord is too thick to make the knotting work, even though I like the colors. I'll be taking this apart and trying something else. 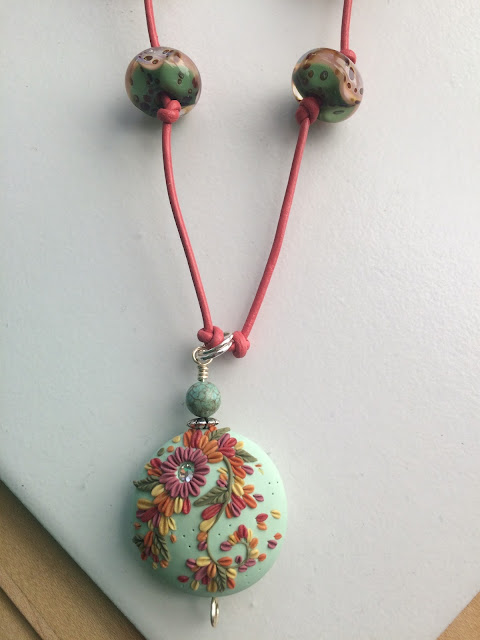 And finally, I'm trying to figure out what to do with this pendant I bought for myself. I absolutely adore it --I just love that the artist would see lichen in nature and come up with this. This was made by Blueberribeads. 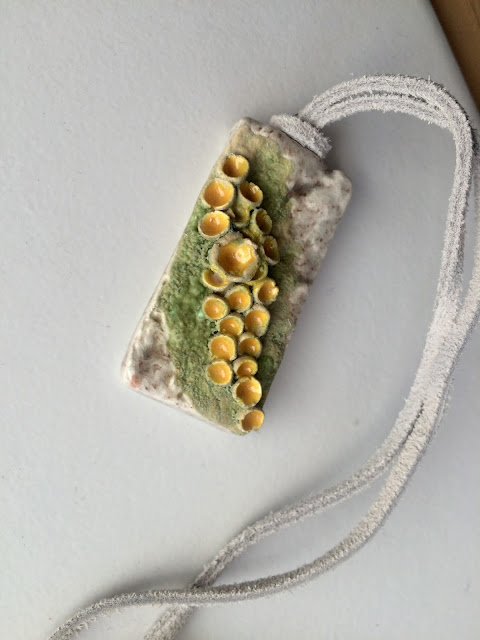 I've also started to just wire wrap some beads --this is one way some jewelry artists have recommended getting over a slump. Eventually you have enough that they come together as a project. I hope to spend more time beading as we move closer to the holidays.

As Facebook friends already know, we just adopted three kittens. We had intended to adopt two, however, there happened to be a litter of tabby-point Siamese (which is just another way of saying a tabby-Siamese mix) at the shelter. I grew up with a Siamese cat, and she was just a really wonderful pet, so I'm particularly fond of them. I fell in love with all of them, but since Emma had found a Russian Blue mix, we just chose one of the Siamese and the Russian Blue. We picked them up on Monday, and found that their personalities were just about the opposite of what they'd seemed in the shelter. 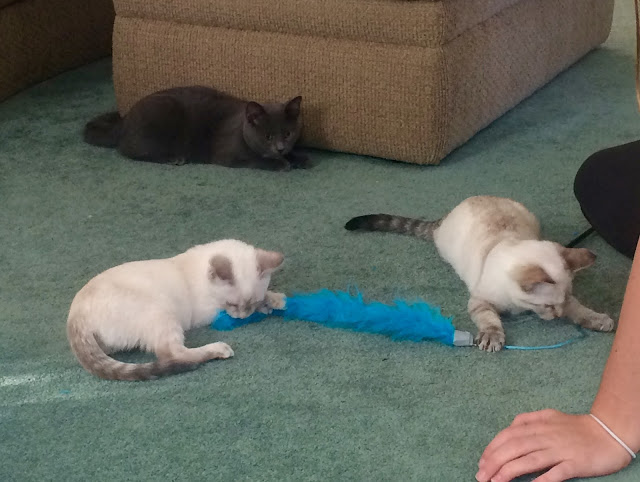 Jazmine, the Siamese, had seemed incredibly timid (the whole litter had seemed quite timid), while Grayce, the Russian Blue had been happy to cuddle in Emma's arms. At home, Jaz became the kitten you'd expect of any 2.5 month old, but Grayce was very skittish, mostly trying to hide all the time. Because Grayce was hiding, Jaz didn't have anyone to play with.

I headed to Ann Arbor that Friday morning, and Rob decided to go see if Jazmine's sister was still at the shelter. He was feeling sorry for Jaz, and I encouraged him to adopt the sister. So Cinnamon came home with Rob on Friday to join the collection. Since that time Grayce has warmed up some. She is very friendly with Jaz and Cinnamon, but she is still quite skittish when people walk around. If you can pick her up, she is happy to sit in your lap, but if she's in a room she seems to always be looking around to make sure she's safe. She was brought to the shelter as a stray, but it's hard to imagine what happened in her short life to make her so scared. 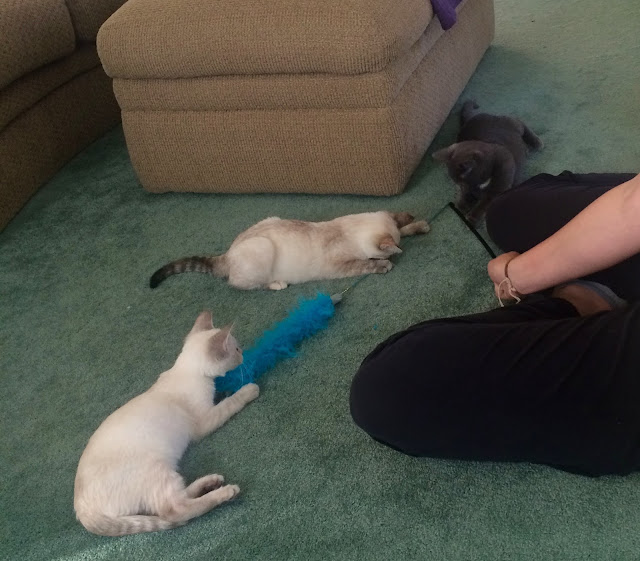 In other news, we did finally get a hard enough frost that we have a puddle of gold around the base of a maple tree. It's glorious, even if it's just for a few days. 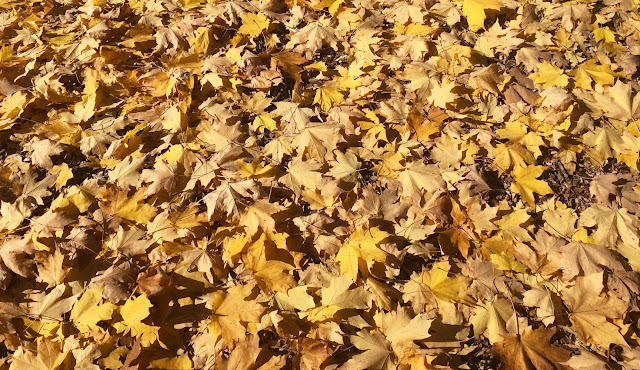 Today I remembered that I needed to plant a few more bulbs --they've been languishing in a box while we welcomed three new kitties. Today, the 4th of November, was a balmy, sunny, day. I managed to get the rest of the tulips and grape hyacinths in the ground. 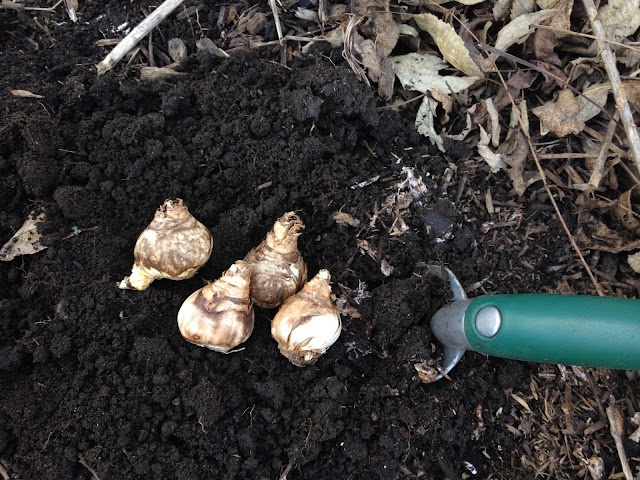 Then I walked down to where I'd planted some bulbs earlier, and found that the grape hyacinth are a bit confused about the season. 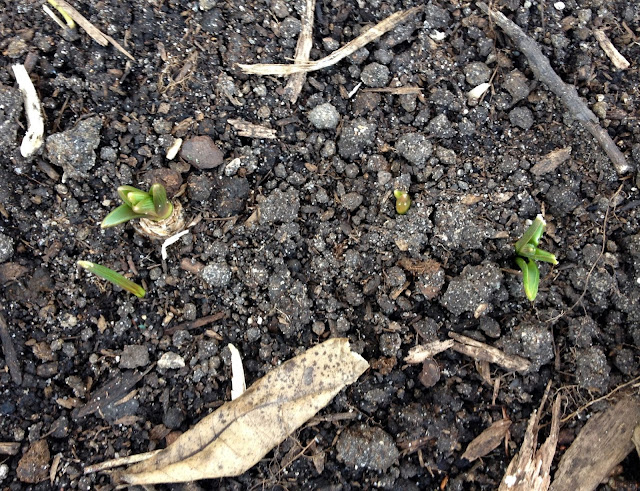 As is this groundcover, which normally blooms in late spring. 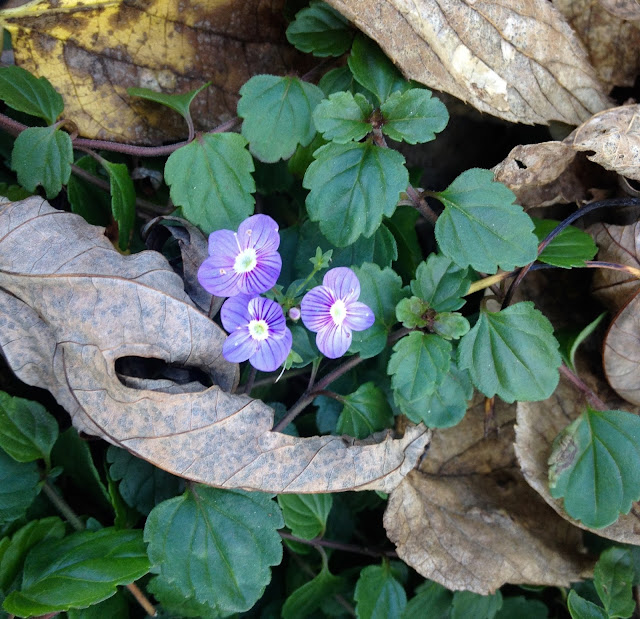 I am beginning to wonder if we're ever going to get a freeze. Usually by this time a freeze has created beautiful puddles of bright red and gold leaves at the base of the trees. No so this year --the leaves are coming down slowly with the winds.
Posted by Cassi at 5:59 PM 4 comments:

Taking a tip from a blogging friend, I picked up supplies for my recent trip to visit Ann Arbor, to see my parents. 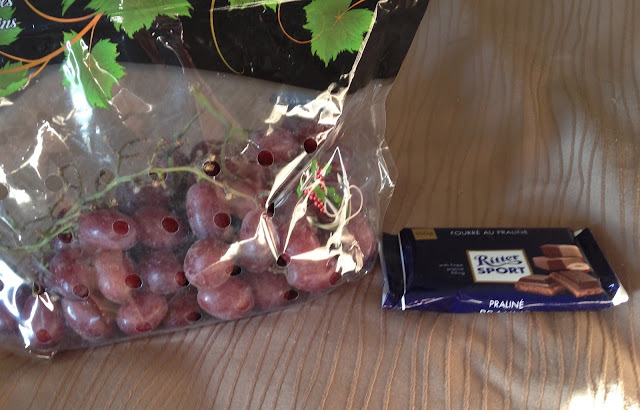 I didn't need to include the alcohol because my mom always has a decent supply of good wine :-)

My dad is doing much better --and in fact, so is my mom since she's not having to worry quite so much about him.
Posted by Cassi at 8:29 PM 5 comments:

Newer Posts Older Posts Home
Subscribe to: Posts (Atom)
If you have a library and a garden, you have everything you need.
~Socrates